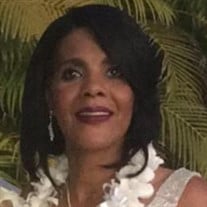 Alice Brewer Age 60, of Berkeley, MO. On the day of October 28, 1958, in the city of St. Louis, MO, the Angels communed with the Lord and the heavens met the sky with a beautiful creation in mind. God’s own heart and a special soul laced in an anointed garment of flesh was about to intertwine. The sky was clothed in golden sunrays, pink ribbons, soft baby blues, and royal purple hues. God was preparing the earth to behold an angelic gift of a generous life to bless the lives of many. On this day we were all graced with the birth of an earthly Angel from heaven, Alice Brewer. Alice was born the sixth of seven children to the union of Ronald Smith Sr. and Birlie Smith. Alice’s father, sister Crystal Allen, and brother Tony Smith, all preceded her in death. Her parents built a strong foundation and loving life for their family in St. Louis, MO. They settled in the same family home in Berkeley, MO from 1963 to this current date. Alice graduated from Berkeley Sr. High School in the class of 1977. She left a legacy of friendship, kindness, and creativity with many and was known as a fierce competitive athlete on the Softball and Gymnastics teams. Alice was a true team player at heart. She attended Fontbonne University in Clayton, MO shortly thereafter. Alice was extremely caring, nurturing, and generous with her time and belongings. She was always available and willing to be everyone’s cup of cold water and bless them in their times of need. She fully displayed what it meant to ‘Love thy neighbor’ with her life. In her earlier and later years she often protected and took care of her parents, siblings, and friends. Many have stated that they would not be living to this day if it weren’t for Alice’s detailed and heartfelt care. She was known as the ‘Chief Nurse’ in the family. During her own trials, pain, and illness it gave her much gratitude to still put others first. Alice enjoyed close fellowship with family and friends. Alongside her mother, she was the magnet that attracted family members together at frequent gatherings, cookouts, holiday events, and more. She’d always take the lead in cooking large dinners, decorating, and buying gifts. Alice made sure that every family member, child, and grandchild received this gift of time and joy & happiness during these moments. She truly didn’t believe in leaving anyone out. When she wasn’t occupied tending to all the needs of others, some of her favorite hobbies included watching dramas on television, writing poetry, sleeping (smile), shopping, dancing at parties, and playing cards. She had such a passion for playing Trash, Tunk, Black Jack 21, Pitty-Pat, and visiting Casino’s around the US. If she were given a middle name it would surely be ‘Luck’ because it was always on her side! Sharing her lucky winning streaks with those around her was one her favorite things to do. Alice was also quite the fashionista and Queen of coordinating colors, patterns, textures, and accessorizing very elegantly! She was a Stunner! She birthed three (3) daughters and one (1) son. She was a strong-willed single mother who loved and cared deeply for all of her children and grandchildren. Alice had an active career at the United States Postal Service at the downtown St. Louis and Bulk Mail Center in Hazelwood, MO from 1989 to 2008. Alice was known for being a small individual, yet had a powerful voice within her roles as a Shop Stewart and Clerk at the Post Office. She built strong personal friendships and relationships with many of her coworkers. She is gone but those relationships will never be forgotten. Alice leaves several gems to cherish her beautiful memory forever: three loving daughters, Natasha Brewer-Asher, Yolanda Boone, Shalanda Brewer, and one gracious beloved son, Tre’von Smith. In addition, three grandchildren, Taylor Boone, Travis Boone Jr., and Lauryn Boone. She also has two sisters and two brothers Velma Lang, Valerie Smith, Ronald Smith Jr., Perry Coats, and an honorary sister whom her parents helped care for, Cherry Rochelle Cuffie. She leaves a host of nieces and nephews, cousins, sister-in-law’s, brother-in-law’s and friends. Alice will also be missed by her neighbors and will be joining her dear encouraging friend that preceded her in death, Minnie Jackson.

Alice Brewer Age 60, of Berkeley, MO. On the day of October 28, 1958, in the city of St. Louis, MO, the Angels communed with the Lord and the heavens met the sky with a beautiful creation in mind. God&#8217;s own heart and a special soul... View Obituary & Service Information

The family of Alice Brewer created this Life Tributes page to make it easy to share your memories.

Send flowers to the Brewer family.