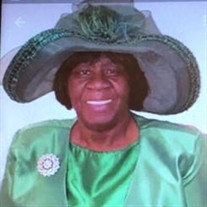 Evangelist Anna Grier, 77 of Jennings, Missouri. Pastor / Evangelist Anna Grier was born on July 12, 1941 in St. Louis Missouri to the union of Calvin Sr. and Matilda Collins. Calvin Sr. and Matilda Collins also bore five other children (Sisters Vera Dungey (deceased) Ruby Collins (deceased) Calvin Collins Jr, Idella Barker and Shirley Collins). She attended Vashon High School and furthered her education attending Stewart Electronics school in Chicago IL. She also acquired an associates degree in Electrical/Electronic Engineering from Florissant Valley Community College. She retired from Emerson Electric Company after 30 Years where she also became the President of the Union board, where she was loved and respected by all. Pastor / Evangelist Grier was not just a trailblazer for Christ but a Matriarch to her church and family. She would always say “ Preach the word, be instant in season, out of season, reprove, rebuke, exhort with all longsuffering and doctrine”. II Timothy 4: 2 and in preaching the word you would have to understand the doctrine of obeying Acts 2:38. She was a true believer of the Apostolic faith under the tutelage of Bishop Charles E. and Evangelist Mattie B. Poole in Chicago IL. This is where she received the gift of the Holy Spirit. Pastor / Evangelist Grier assisted her husband in establishing Bethlehem Healing Temple of St Louis, Missouri in 1973. Her husband elevated from Minister, Pastor, District Elder to Bishop with the blessing of Bishop Charles E. Poole. Pastor / Evangelist Grier continued her husband’s legacy through missionary work teaching in religious settings later to become a evangelist and pastor with the blessing of Bishop David Jackson. Pastor / Evangelist Grier was united to Bishop Robert L. Grier (deceased) on August 16, 1962 a union of 50 Years. Throughout her legacy she has brought many souls to Christ; She have fought a good fight, she have finished her course, she has kept the faith: Henceforth there is laid up for me a crown of righteousness, which the lord, the righteous judge, shall give me at that day: and not to me only, but unto all them also that love his appearing Pastor / Evangelist Grier leaves to cherish her memories her beloved son Robert Grier Jr. daughter Dana D. (Bruce) Ford, Antwan (Charmell) Grier; four grandchildren, Brittany Drake, Alicia Perry, Sarai Grier and Donte Freeney. One brother, Calvin Jr. (Shirley) Collins; two sisters, Idella (Frank) Barker, Sr. of Chicago, Illinois and Shirley Collins of Dallas, Texas; and a host of nieces, nephews, Bethlehem Healing Temple church family and other family and friends.

The family of Anna Grier created this Life Tributes page to make it easy to share your memories.

Send flowers to the Grier family.