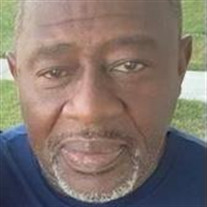 Carl Edward Evans, Jr. Age 57 departed this life on January 7, 2022. He was born on August 4, 1964 in St. Louis, Missouri to the union of Carl E. Evans, Sr. and Thelma (Patterson) Evans. Carl E. Evans, Sr. preceded him in death. Carl enjoyed life and lived it to the fullest. He enjoyed playing basketball, watching football and so many other sports. No one was a stranger to Carl. He was a big person on family and Carl loved his family very much. He really enjoyed playing with kids. He loved to serve others or just to be a help to anyone. Carl loved to Bar-B-Que! Carl confessed a belief in Christ at a very early age. He was a member of Shalom City of Peace from December 2010-2015. Carl moved to Springfield, Illinois in 2015 where he met and married Cheryl (Miller) Evans unto his death. Carl joined Abundant Faith under the leadership of Minister James Cockrell of Springfield, Illinois. He leaves his memories to: his wife, Cheryl (Miller) Evans, his mother, Thelma Evans, his children, Todd Evans (Kelly), Carla Evans (Greg) and Jeremy Banks, his sisters, Harriet Evans and Alethea Robertson (Chester) and his grandkids, Jeremiah, Kayla, Cali, Jordyn and Navaeh, his aunts, uncles, cousins and a host of family and friends.

The family of Carl Edward Evans Jr. created this Life Tributes page to make it easy to share your memories.

Send flowers to the Evans family.