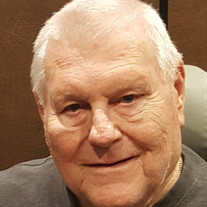 Charles E. Herrmann, Sr., 83 of St. Charles, Missouri was born in Hannibal, Missouri to Alvin and Bertha Herrmann. He is survived by his wife Patricia Herrmann; his children Lisa (Alan) Rosenburg, Diane Shaver, Lori Wilmas, Charles E. (Kim) Herrmann, Jr. and his stepchildren Stephen (Janet) Wind, Laura (James) Ederle, David (Rhonda) Wind, Mary (Richard) Hodapp,and Gregory (Kelly) Wind; 19 grandchildren and 21 great grandchildren; his brother John (Christa) Herrmann. He was preceded in death by one son-in-law, Robert Wilmas and one grandson. Chuck served as a Seabee in the United States Navy. He was a machinist by trade. He retired from Watlow Electric Manufacturing Company in St. Louis, Missouri. He was a skilled woodworker and produced many beautiful pieces of furniture, toy boxes, and other special pieces. He especially enjoyed handcrafting golf clubs. Besides being in his workshop, Chuck liked to spend his free time playing golf and watching Bonanza and Gunsmoke reruns. Most of Chuck's adult life was spent living in Hazelwood, Missouri, where you could find him sitting in the swing on his front porch talking to neighbors and watching traffic go by. He served as a citizen volunteer with the Hazelwood Police Department for many years and very much enjoyed the ways he could be helpful to the department. Chuck had a great sense of humor and could always be depended on to make some kind of a pun or smart remark. His "Chuck-isms" will be remembered by everyone who had the chance to hear one. Chuck donated his body to St. Louis School of Medicine for teaching and research purposes. His life will be celebrated Saturday, February 23, 2019. Memorial donations in memory of Charles "Chuck" Herrmann may be made to: Charles and Joanne Knight Alzheimer's Disease Research Center, 4488 Forest Park, St. Louis, Missouri 63108 - Attn: Dr. Virginia Buckles or The BackStoppers - Post Office Box 795168 - St. Louis, MO 63179-0700

The family of Charles E. Herrmann Sr. created this Life Tributes page to make it easy to share your memories.

Send flowers to the Herrmann family.