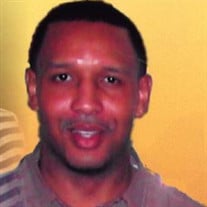 Charles Lewis Age 40 of Tucker, GA. Charles Arrol Lewis was born lovingly to Laura Lewis and Arrol Howze on January 8, 1980. He grew up with his stepfather, Jerome Johnson, sisters Katrina, Tory and brother Keith Johnson. He attended Greater Mt. Carmel M.B. Church. He accepted Christ on Easter Sunday in 1986 and was baptized. He was an active member of the Sunday School, Sunlight Choir, Junior Usher Board and the Church Boy Scout Troop. Charles was, also, lovingly known as “Chuck”. He started his education at Griffith Elementary School, Halls Ferry Elementary, Cross Keys Middle and graduated from McCluer North High School in 1998. He earned a football scholarship at Southeast Missouri State and graduated in 2003 with a degree in Communication with an Emphasis in Corporate Video. He completed an internship in Atlanta, Georgia, where he decided to make a home. He worked with several companies and was working with the Federal Government. Charles met his wife, Shavonne Brown, in Atlanta, and they were married in February 2017. To this union, a daughter was born, Laura Angel. Charles departed this life on Wednesday, May 6, 2020, because of senseless violence. He now rests in the arms of Jesus Christ-- “for to be absent from the body is to be present with the Lord.” - 2 Corinthians 5:8. He leaves to mourn daughters: Niyah, Brooklyn, Laura; one son, Nathaniel; stepdaughters: Kiara, Tierra, Laila; his loving wife, Shavonne; mother, Laura Johnson, stepfather, Jerome Johnson; father, Arrol Howze, and a host of aunts, uncles, nieces, cousins, colleagues and friends. SERVICES WILL BE LIVE STREAMED FROM OUR Archway Memorial Chapel Facebook Page and will begin approximately at 10 am.

The family of Charles Arrol Lewis created this Life Tributes page to make it easy to share your memories.

Send flowers to the Lewis family.