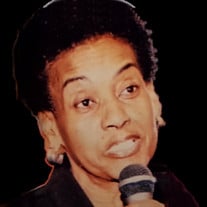 Clara Mae Rice O'Neal Age 78 of St. Louis, MO. Clara Mae Rice-Oneal was born on March 11,1942 in Brinkley Ark., to William and Everlyna Bell Rice. She was proceeded in death by both her parents and her first born Grandson Ricky A. Portwood jr Clara, attended Elementary and High School in Brinkley Arkansas at Marion Anderson and once she moved to St.Louis she received her Associates Degree from Forest Park Community College in Child Day Care and she later went on to obtain her Bachelors degree from Pillsbury College of Theology. When Clara, live in Hempstead New York she worked as an associate for Macy’s Department store. When she moved to St.Louis, she worked at 9-0-5 Beverage store for many years and then she started doing what she loved the most and that was working with the Children. She worked for the Human Development Corporation for many years where she operated out of her home a home daycare. Clara, professed her hope in Christ at a very early age and later became a dedicated member to First Baptist Church in St.Louis, Mo. Where she sang in the infamous Bracy Angelic Choir for many years and then later on in life Clara joined Victory Christian Outreach Church under the leadership of her Brother Apostle Lee and his late wife Apostle Doris Rice, she on the usher board and she worked in the children’s daycare and she was also a part of the “ Women of Destiny” auxiliary Component at VCOC where she remained a faithful member until her health began to fail. Clara, loved her family and her friends and always enjoyed and looked forward to family outings especially the big ones we use to have in Arkansas when her closest and dearest cousins would come home from Chicago Ill., they would have the best times of their lives. Clara also assisted in the raising of her oldest Grandchild Ricky, (who has proceeded her in death), she taught the child how to drive before he could ride a bike good, he loved his grandmother and always wanted to be with her, She was his “Sweet”. Clara also loved going to church, she loved singing, she loved the word of God, she was a genuine sweetheart and yet a stern individual who had no problem speaking her mind. She would help anyone who needed it if she could and that part of her and so much more has been passed down thru her children. Clara was a very courageous woman; the epitome of Strength and she was what love looked like. If you did not have the opportunity to know her, you certainly missed out on a Gem. We’re going to miss you my Darling, until we all meet up in Heaven again, you rest now Queen, you deserve it. She leaves to cherish her memory; four children, Ray Anthony Rice of Brinkley Ark, Treda Rice-Vance of Pine Bluff Ar, Patricia(Dexter) Rice-Wilson of St.Charles, Mo. and Reba Rice-Portwood of St.Louis Mo. She leaves three grandchildren Shanice D’Shae Rice of Forrest City AR., Regis Wilson of St.Charles, Mo and Bre’Anna Wilson of St.Charles, Mo, and Terry Rice, Two great grandchildren: Jackson Ricky Portwood of St.Louis and Cali Allen and Ann Rice, Six Brothers, Joseph Rice of Brinkley Ar. Wilkie Rice of East St.Louis, Ill, Fred (Darlene) Rice of St.Louis, Mo. Apostle Lee(late Doris) Rice of St.Louis, Theodore (Clem) Rice of St.Louis, Mo.and Larry (Doris) Rice of Pine Bluff Ar. , two sisters Wilidale (Herman)House of Denver Colorado and Thelma and her long time sister-in-law friend/ Laverne Rice of Belleville Il. PLEASE WEAR MASK AT ALL EVENTS.

Clara Mae Rice O'Neal Age 78 of St. Louis, MO. Clara Mae Rice-Oneal was born on March 11,1942 in Brinkley Ark., to William and Everlyna Bell Rice. She was proceeded in death by both her parents and her first born Grandson Ricky A. Portwood... View Obituary & Service Information

The family of Clara Mae Rice-O'Neal created this Life Tributes page to make it easy to share your memories.

Send flowers to the Rice-O'Neal family.