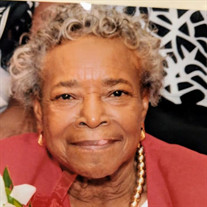 Elizabeth Brezill, 88 of St. Louis, was born August 19, 1930, in Mercer, Tennessee to Charles Anthony Fuller and Emma (Anderson) Fuller who were the proud parents of 11 children with Elizabeth being the oldest. At an early age Elizabeth was baptized at Home Baptist Church. She attended South Jackson Elementary and graduated from Merry High School, throughout life remaining an active alumni of both schools. Elizabeth was married to John Epps in 1952. To this union was born Tracy Epps in 1957. Elizabeth later married Samuel M. Brezill in 1977 and they were married for over 20 years, until his death in 2001. After completing her high school degree, Elizabeth moved to St. Louis, MO. Immediately upon arriving to the city, she began working for Dr. E.O Massey, DDS. This was an opportunity of a lifetime as Elizabeth embarked upon a career in dentistry. In December of 1967, she received her dental lab technician diploma from the Missouri School for Doctors’ Assistants. Given her early experience and exposure with Dr. Massey, she was able to complete a 2-year program in just 12 months. Her position gave her the chance to impact all aspects of the office, from administrative duties, assisting the doctor chair-side, ordering supplies, taking and pouring impressions for dentures, crowns, and bridges. She was great at repairing dentures and making transitional partials and flippers. As she would tell you “I’ve done it all.” After leaving private practice, Elizabeth was employed by the Granite City Army Depot’s Dental Clinic which served those in the military. She finally retired in 1994. Even though the officers and generals towered over her in stature, they all knew who the boss was! Elizabeth was tiny but MIGHTY! She would often say, “I am a small piece of leather, but well put together and I cover every bit of ground that I stand on.” Elizabeth’s career in dentistry led to becoming involved in many organizations, such as the Mound City Dental Association (MCDA), which she joined in 1960 and later became president. The MCDA was known for its work in the community. They spent time at local public schools teaching children about the importance of proper oral health. Additionally, Elizabeth was a member of the National Dental Assistant Association, where she served 2 separate terms as president. She received a number of awards and commendations due to her leadership, service, achievement, and commitment to dental care within the black community and military. Elizabeth was not only involved in dentistry but was a valued member of Greater Mount Carmel Church. During her over 50 years of as a member, she served on the Hospitality Committee, Secretary of the Baptist Training Union, a Crusader, member of the Health Unit, attended Sunday School, and a member of the choir. One of her most treasured duty was to pin a flower on all of the guest ministers participating in the annual pastoral laudatory service. As you can see, she was eager to offer her leadership and commitment to any tasks asked of her to meet the needs of the church. Elizabeth is survived by her daughter, Tracy Epps Novel, grandchildren Angel Simmons (Felix), Kellie Novel, Kevin Novel II (Tamara), great- grandchildren Michael, Kaelyn, Kaden, Kevin III, Korey, and Mckensey. Her siblings Naomi Brown (Roland), Frederick A. Fuller, and Reverend Terry L. Fuller (Sabra). A host of nieces, nephews, family, friends, and her Greater Mount Carmel Church Family. Preceding Elizabeth in death were her parents Charles and Emma Fuller, siblings: Thedda Louise, Mattie, Jimmy, John, Lonzo, Lynda, and Charles. The Family has requested in lieu of flowers Contributions in Memory of Elizabeth Brezill be made to: Attn: Dr. Virginia Buckles Charles and Joanne Knight Alzheimer’s Disease Research Center 4488 Forest Park, St. Louis, Missouri 63108 Telephone: 314 286 2683

Elizabeth Brezill, 88 of St. Louis, was born August 19, 1930, in Mercer, Tennessee to Charles Anthony Fuller and Emma (Anderson) Fuller who were the proud parents of 11 children with Elizabeth being the oldest. At an early age Elizabeth was... View Obituary & Service Information

The family of Elizabeth Brezill created this Life Tributes page to make it easy to share your memories.

Send flowers to the Brezill family.