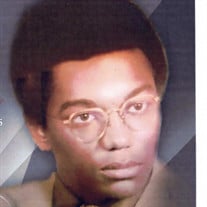 Mr. Gary Burgess, 66. Father, Brother, Family and Friend. He attended the Maplewood-Richmond Heights School District graduating in the class of 1973. He received a dual Bachelor Degree in English and Mathematics from Lincoln University in Jefferson... View Obituary & Service Information

The family of Gary Allen Burgess created this Life Tributes page to make it easy to share your memories.

Send flowers to the Burgess family.