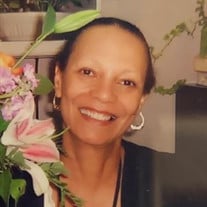 Hazel "Jackie" Doss Age 74 of Spanish Lake, MO. Hazel Jacqueline (Baker) Doss was born July 27, 1947 in Farmington, Missouri to Clifton Baker and Mignon (Davis) Baker. She was baptized at a young age at Sacred Heart Church in Ironton, Missouri. Hazel graduated from Farmington High School. She wed Charles E. Matthews Sr. and one son, Charles E. Matthews Jr. was born from that union. She later married Clifford Doss, and two children, Leisa Mignon Doss and Clifford Doss Jr. were born from that union. Hazel was employed at several companies, but she was most proud of her work at Monsanto Company where she worked for twenty years as an executive assistant, and at The President Casino for fifteen years as the payroll assistant. Hazel was very athletic. She was a cheerleader at Farmington High School, she liked to ride horses, play tennis, swim and she bowled in a league for several years. She LOVED to dance and show her ability to do splits; which she could still do until the last few years! She loved to cook and spent hours preparing holiday meals. One of her favorite things to do was to spend time with her grandchildren. On Wednesday, January 26, 2022 at 9:06 am at the Estates of Spanish Lake Nursing Home, the Lord called his dedicated servant home. Hazel leaves to cherish her memory, her three children Charles (Pamela), Leisa (Domonique), Clifford (Gina); 10 grandchildren, Jasmine, Anthony, Cortney, Shaunnessy, Shaun, Shannon, Javious, Madison, Jaleesa, and Janelle; seven great-grandchildren, Kamori, Ellah, Noah, Xavier, Mekylan, Mekhel, and Mekadyn; two sisters Mona Evans, Karen Boyd (Charles), and James Gregory Jr.; cousin Mignon Thomas (Gregory); and a host of nieces, nephews, cousins and many friends, as well as a very special friend of many years, Alex.

The family of Hazel "Jackie" Doss created this Life Tributes page to make it easy to share your memories.

Send flowers to the Doss family.