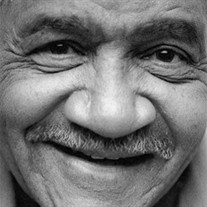 Hugh David Whalum, Jr., was born September 8, 1928, in Memphis, Tennessee. He was a passionate musician, educator, husband, father of seven, grandfather (11), great-grandfather (15), brother, mentor, and friend. “Peanuts,” as he was affectionately known, possessed the rare mixture of intelligence, humility, and humor. Above all he was warm, cheerful, charitable and committed to music excellence — both instrumental and vocal. For decades, Peanuts delighted audiences all over St. Louis and the United States with his musical performances, playing with greats such as Count Basie, Leontyne Price, Duke Ellington, and Nat “King” Cole. In 2014, Peanuts was inducted into the St. Louis Jazz Hall of Fame. Veronica Freeland was the love of his life and cherished wife for nearly 70 years. To this union, seven children were born: David, Judy, Connie, Angela, Tony, Mary Beth, and Stephanie. He was preceded in death by his parents; his daughter, Judith Ann; his brothers Wendell Phillips, Harold Jamison and Kenneth Twigg; and his dear uncle and friend, Attorney/Judge Henry Leon Twigg (St. Louis). He was a proud member of Alpha Phi Alpha Fraterity. His dear sister, Rosemarie Whalum Pollard (Memphis), and a host of nephews, nieces, other relatives, and friends will cherish and remember ALL of the blessed times and events shared with our special and beloved “Peanuts.”

The family of Hugh "Peanuts" David Whalum Jr. created this Life Tributes page to make it easy to share your memories.

Send flowers to the Whalum family.