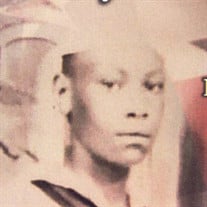 Isaac Parker was born to the union of Holsey Curle and Pearlie Mae (Norman) Parker in Woodson, Arkansas on June 8, 1924. He accepted Christ as his Saviour at an early age and attended church with his family every Sunday. Isaac decided to join the military after graduating from school. On July 31, 1941, at age seventeen he enlisted in the United States Navy. After basic training he was assigned to the USS Oklahoma, a battleship stationed at Ford Island, Pearl Harbor, Hawaii on September 29, 1941. At eight o’clock on that fateful Sunday morning, December 7, 1941, only two months and eight days after Isaac’s arrival, the USS Oklahoma and several other ships stationed on Battleship Row were attacked by Japanese forces. The Oklahoma suffered multiple torpedo hits causing her to capsize as the crew fought valiantly to defend the ship. Four hundred and twentynine sailors and Marines died on board the USS Oklahoma. A total of two thousand, four hundred and three crewmen were killed in action that day on eight of the battleships stationed in Pearl Harbor. The surprise aerial attack by the Japanese precipitated the entry of the United States into World War II.In the days, months and years following the attack, remains of men lost aboard the ships were recovered. Thirty-five crewmen from the Oklahoma were initially identified; the unidentified remains were buried at the National Memorial Cemetery of the Pacific (NMCP), known as the “Punchbowl” as “unknowns.” After eighty years, due to the advances in forensic science and the military’s commitment to identifying the remains of personnel killed in action in all branches of the service, the United States Navy returned the remains of Mess Attendant Third Class Isaac Parker to his family to be interned in his final resting place at Jefferson Barracks National Cemetery in St. Louis, Missouri alongside of his parents Holsey Curle and Pearlie Mae Parker, his siblings C. D. Parker, H. C. Parker, Pearlean (Parker) Henderson, Flora (Parker) Jones, Herman Parker and his oldest nephew Patrick Parker. Isaac leaves to cherish his memory a host of loving family and friends. He is forever in our hearts. Just as the earth goes through seasons so does a family in the course of time endure seasons.

Isaac Parker was born to the union of Holsey Curle and Pearlie Mae (Norman) Parker in Woodson, Arkansas on June 8, 1924. He accepted Christ as his Saviour at an early age and attended church with his family every Sunday. Isaac decided to join... View Obituary & Service Information

The family of Isaac Parker created this Life Tributes page to make it easy to share your memories.

Isaac Parker was born to the union of Holsey Curle and Pearlie...

Send flowers to the Parker family.