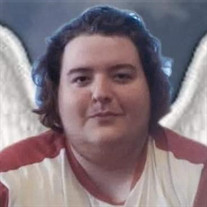 Jeffery James Perkins of St. Louis, Mo passed November 6, 2021 at the age of 22. Jeffrey James Perkins was born on November 2, 1999, in Lake St. Louis, MO to the union Jeffrey Allen Perkins and Jacki Lynn Marks-Perkins. Jeffrey was educated in the St. Charles school system and graduated from Job Corps. After high school, Jeffrey entered into the food services and helped rehab homes. Jeffrey loved football rode motorcycles and dirt bikes. He was an excellent marksmanship. HE always took things apart to see how they worked including his motorcycles, laptop computers. He once took a spark plug out of a lawn mower and put into his go cart to make it work.. get this, he was only 3 years old. He loved his Father, riding, listening to music and he was all about motorcycles. Once, he jumped on his dad’s bike and took off, boy he had a blast for almost two hours. He also loved to fish and he adored his nieces and nephews. He could put them to sleep and calm them down better than anyone. Jeffrey had a unique ability of calming down special needs kids while at school when no one else could. He loved music, listening to the blues and Etta James and to name a few. He loved to be comfortable and didn’t care how looked if he wore his tie-dye pants and matching shirts, they were comfortable. Jeffrey had natural curls in his long hair and his beard was just as smooth. He wore his hair in a bun at times to impress the women. Jeffrey was a loyal friend, he had a great since of humor, He would say, “ If you are going to laugh at me.. you better point at me”. Jeffrey would do anything not only his friends..but others.. he once took his shoes off his own feet at a gas station to give to a homeless man. When he came back to his mom in the car with just his socks on. His mom asked why? “We can barley afford new ones” and he said, “ Because he needed them”. Jeffrey not only was huge physically, but for a large man, he could sneak up on anyone, it was like he was walking on cotton balls. He often purposely scared folks with his stealthies way…. but Jeffrey had a heart of gold that was 100x as big he was. Jeffrey wasn’t raised really attending a church, however, in his solitude he was known to read the Bible and the new significance of prayer. He prayed the “Our Father Prayer” often. He leaves behind to cherish his memory, his loving his Father and mother Jeffrey and Jacki. His siblings, PJ, Jacob, Sara, his nephews and nieces, Milo, Dominic, Millie, Nevah. His uncles Jason and Joey and his aunts; Bilar, Leah and Missy. And a host of family and friends who will truly miss him. Jeffrey departed this life to soon for us, but according to his numbered days on Saturday, November 6, 2021.

The family of Jeffery James Perkins created this Life Tributes page to make it easy to share your memories.

Send flowers to the Perkins family.