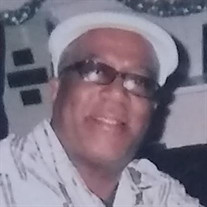 Jesse James Sharp, Jr. of St. Louis was born in St. Louis, MO to the late Jesse, Sr. and Dorothy Sharp. He served his country in the United States Army. He was employed at ViJon Laboratories. Preceding him in death was his sister Terrie Sharp-Snelling.... View Obituary & Service Information

The family of Jesse James Sharp, Jr. created this Life Tributes page to make it easy to share your memories.

Send flowers to the Sharp, family.