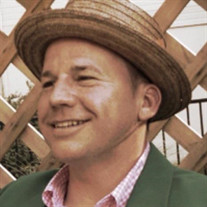 Justin M. Thompson Age 46 of Wentzville, MO. On Tuesday, October 8, 2019, Justin Mathew Thompson, loving husband and father of four children, passed away at the age of 46. Justin was born on August 27, 1973 in St. Louis, Missouri to William and Carla. He graduated from McCluer High School in 1991, and pursued his passion in the car business for over 25 years. He was blessed with his first son, Justin Jr., in 1991. On March 13, 2013, he married his love and partner of over two decades, Candace Anna Cabrera. Together they had two daughters, Madelyn and Gracin, and a son Quinten. Justin was known for his quick wit, his infectious smile, and his kind and compassionate spirit. He loved sharing his free time with family and friends, listening to music and socializing. He was fun-loving, and will be missed by many. Justin is survived by his father, William, his mother, Carla, and his step-father Lonnie Burnham. Along with his wife, Candace, his four children, Justin Jr., Madelyn, Quinten, and Gracin. Beloved son-in-law of “Nona” and “Papi Tommy”. The dear brother of Robert, Heather, Brandon and Monica. A dear uncle, cousin, and friend to many. A funeral service will be held on Thursday, October 17, 10:00am at Immaculate Conception of Dardenne Chapel, 7701 State Highway N, Dardenne Prairie, Missouri 63368. A luncheon will be provided by ICD following the service and burial. A memorial fund has been set up in honor of their children. Anyone wishing to contribute can make donations to: “Madelyn, Quinten, and Gracin Thompson Memorial Fund” c/o Candace Thompson Account #250391531 1st Financial Federal Credit Union 1232 Wentzville Parkway Wentzville, Missouri 63385 (636) 916-8300

The family of Justin Mathew Thompson created this Life Tributes page to make it easy to share your memories.

Send flowers to the Thompson family.