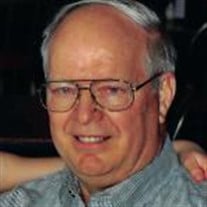 On Tuesday, November 26, 2019, Lavern (Vern) W. Weihl, loving husband and father of two children, passed away peacefully at the age of 85. He was born in Waterloo, IL on February 26, 1934 to the late Arthur and Lydia (Henneke) Weihl. Vern was a 1952 graduate of Waterloo High School. He then went on to serve his country in the U.S Army from 1955-1957 (Active) and 1957–1961 (Reserves) as an interpreter while stationed in Germany. On June 26, 1958 he was united in marriage to the love of his life, Maralee A. (Skiles) Weihl at Astoria Christian Church in Astoria, IL. He was heavily involved in the community, and with his two boys. Vern spent many years as a Boy Scout leader at the Lutheran Church of the Good Shepard in Hazelwood, MO. He was employed by McDonnell-Douglas / Boeing for 34 years retiring in 1993. Vern is survived by his loving wife of 61 years; Maralee, 2 sons; Bradley (Cynthia) Weihl, Barton (Krista) Weihl, and 4 grandchildren; Brandon, Benjamin, Brooke, and Rachel. He is further survived by 2 brothers; Roy (Evelyn) Weihl, and Paul (Joan) Weihl in addition to many nieces and nephews. Vern is preceded in death by his parents, and 2 sisters; Lorine (Elmer) Wuertz, and Dorothy (Harry) Theobald. Our dad was hardworking, strong, loving, kind, and gentle. He loved his family very much. He was not a man of great wealth, and yet he was a very rich man in his faith and family. Family meant the world to him. He was truly proud of his children and grandchildren. We admired him because of the kind father he was to us. He loved us, but he also instilled in us core values that defined who he was. A caring man who kept promises, honored commitment; a man of integrity. He showed strength and love right up to his last days with us. Visitation will be held on Monday, December 2, 2019 from 4:00 pm – 8:00 pm at Archway Memorial Chapel, 111 Taylor Road, Hazelwood, MO. A remembrance service will be held from 10:30 am – 11:30 am on Tuesday, December 3, 2019 at Archway Memorial Chapel followed by a 12:30 pm interment at Jefferson Barracks National Cemetery. In lieu of flowers, Memorial donations can be made in Lavern’s honor to one of these preferred organizations Alzheimer’s Association Attn: Dr. Virginia Buckles Charles and Joanne Knight Alzheimer’s Disease Research Center 4488 Forest Park St. Louis, Missouri 63108 Telephone: 314 286 2683 or the American Heart Association 460 North Lindbergh St. Louis, MO 63141 314-692-5600

On Tuesday, November 26, 2019, Lavern (Vern) W. Weihl, loving husband and father of two children, passed away peacefully at the age of 85. He was born in Waterloo, IL on February 26, 1934 to the late Arthur and Lydia (Henneke) Weihl. Vern... View Obituary & Service Information

The family of Lavern William Weihl created this Life Tributes page to make it easy to share your memories.

Send flowers to the Weihl family.