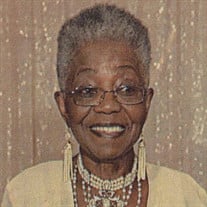 Lola Webb, 77 of University City was born to the late A.B. and Georgia Griffin. She was married to James Webb, Sr. She was as devoted member of The Original Friendship Missionary Baptist Church where she served as a Mother. She leaves to cherish... View Obituary & Service Information

The family of Lola Bea Webb created this Life Tributes page to make it easy to share your memories.

Send flowers to the Webb family.