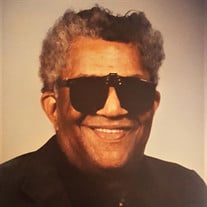 Marcellus Winrow Ronald Watkins, Jr, aka “Marc”, of St. Louis, MO, passed away on Friday, October 16, 2020. He lived 93 years filled with exciting and historic careers. He accepted Christ as his savior and was a member of several Churches. Born on June 8, 1927, in Kinloch, MO, to Marcellus Watkins Sr. and Lucille Elizabeth (Settler) Watkins, he grew up in St. Louis, attending Sumner High School, before moving to Chicago. He was a dining car waiter and cook in the glamorous railroad industry in the 1940’s and 1950’s and became an active political organizer in Chicago in the 50’s. He worked as a haute cuisine chef for major Chicago and St. Louis restaurants and institutions like Playboy Club and Queenie Towers in the 50’s, 60’s and 70’s, transcribed medical records at St. Louis’ Homer G. Phillips Hospital in the 70’s, as well as wrote several manuscripts from the 70’s onward. Retinitis pigmentosa started robbing him of his eyesight in the late 70’s, but blindness did not stop him from giving back to the greater St. Louis community. At various times throughout the latter part of the 20th century and into the 21st century, he took lessons at the School for the Blind on how to teach “DOS” computers to others, taught Sunday school at Centennial Christian Church and other Churches throughout St. Louis, and sang in the Men’s Chorus at Centennial and other Churches. He volunteered as a mentor to underprivileged children at schools in University City and as a bible teacher for prison ministry charities like Mission Gate and Sunshine Ministries. His interests were wide and varied. He was an avid reader of all genres, fiction, non-fiction, histories, science, current events, religion, etc. He loved music and played every day either classical, jazz, opera, choral, or “Music of Motown” recordings. He always loved dogs and had pet dogs, preferably German Shepherds, throughout his adult life. Cooking was both his job and his passion and even into his 90’s he would prepare his own meals. And he was an avid sports fan, following the baseball Cardinals and the St. Louis football teams with equal fervor. Marcellus Watkins came from a large family. He had 9 siblings: Lewin, Evelyn Clay, Emogene, Laverne, Lucille, Ola Mae Watkins-Senter, Ethel, Melvin, and Calvin Watkins. Marcellus is survived by his sister, Ola Mae, and brother, Melvin. In 1949, he married Doris Jane (Valson) Watkins (died 2006) in Chicago, Ill. Six children came from this union: Michael, Vicki, Ronelle, Candice, Paula and David Watkins. Michael and Ronelle have passed on. After Marcellus and Doris divorced in the early 1960’s, he married Gwendolyn Harriett (Bundy) Watkins (died 2001) in St. Louis, Mo. Two children were part of this union: Elizabeth Ann and Mark Gilbert. Marcellus was a father figure to numerous nephews and nieces. He was a loving grandfather, great-grandfather, and great-great-grandfather as well as a wonderful friend to many. In lieu of flowers and gifts, please donate to his favorite charities: https://missiongateministry.org/donate-now-1 https://stpatrickcenter.org/donate/ https://give.sunshineministries.org/ https://newlifeevangelisticcenter.org/ways-to-give/ Thank you and God Bless.

Marcellus Winrow Ronald Watkins, Jr, aka &#8220;Marc&#8221;, of St. Louis, MO, passed away on Friday, October 16, 2020. He lived 93 years filled with exciting and historic careers. He accepted Christ as his savior and was a member of several... View Obituary & Service Information

The family of Marcellus W. Watkins created this Life Tributes page to make it easy to share your memories.

Send flowers to the Watkins family.