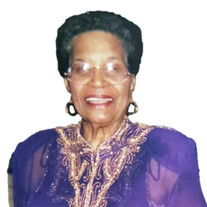 Matrice Wilson Age 91 of St. Louis, Missouri. Fondly known as "Mama Matrice". Matrice J. Wilson was born May 1, 1930, in Bailey, Tennessee. She was one of nine children born to Harry Johnson and Lizzie (MacDonald) Johnson. Her parents, and all but one sister preceded her in death. Mrs. Wilson moved to St. Louis in the 1950s and attended night school at O’Fallon Technical School where she earned her high school diploma. In 1952, Mrs. Wilson joined Greater Mount Carmel Baptist Church under the leadership of the late Rev. Earl E. Nance Sr. where she eventually became the Church Secretary and served for more than 50 years. After retiring, she continued her faithful, devoted membership for the remainder of her life under the pastorage of the Rev. Earl E. Nance, Jr. God blessed Mrs. Wilson with a perfect voice for singing the gospel and shortly after her first visit to GMC in 1952, she became a member of the church choir and was a favored soloist in what became the “Nance Choral Chorus,” and then the “Nance Choraliers.” Mrs. Wilson served as Director and President of the “Nance Choral Chorus”; Director of the “Youth and Young Adult Choir”; and the first female to coach youth softball for Mathews-Dickey Boys Club. As their coach, she led the GMC team to win and hold consecutive championships in the 1960s. She was a fierce fundraiser for the church, spearheading several successful, innovative, initiatives including the Greater Mt. Carmel Coronation. Mrs. Wilson extended her Christian service as youth advisor for the National Baptist Convention and Director of Youth Programs for the Midwest Regional, St. Louis Progressive District. Mrs. Wilson loved arts, cultural and civic events; always stayed abreast of current events; and owned an extensive and enviable collection of African-American movies. She was also an avid reader with an expansive library of African-American, inspirational and religious titles. Her favorite author was Dr. Maya Angelou. She even had expertise in theater, serving as director of Greater Mt. Carmel’s performances of “The Slabtown District Convention.” Always dressed exquisitely, Mrs. Wilson was the consummate “fashionista” with a statuesque physique who was always “dressed to the T,” from head to toe. Although favorite stores were Saks Fifth Avenue and Nieman-Marcus, she also enjoyed stylish outfits purchased by her personal shopper Lynda (Conley) Ivery. Matrice married Ben Wilson, a deacon at Greater Mt. Carmel, in 1955. They remained married until his death in 2005. Though no children were born to their union, many children knew them as “Uncle Ben” and “Mama Matrice,” a title she honored and fulfilled. Her commitment to the safety and wellbeing of children and youth is evidenced by the large number of parents who entrusted their children to her. She loved to travel and took every opportunity to visit new places oftentimes, taking youth so they would experience a world beyond their neighborhoods. “Mama Matrice” is remembered by many children, youth, and young adults as a strong disciplinarian, who understood the need to chastise and love – and she was a stern consistent practitioner of each. Because of “Mama Matrice’s” passion for seeing young people grow into respectable, successful citizens, she often assisted with educational expenses, attended PTO meetings, weddings, graduations, offered counsel, was always a ready listener and source of encouragement, comfort, and laughter. Matrice J. Wilson peacefully transitioned to God’s arms on July 4, 2021, at Mother of Good Counsel Home, where she had resided for the past 6 years. She leaves to mourn her passing, her sole surviving sibling, Louisa (Johnson) Shipp of Memphis, Tenn.; Lois Conley, her devoted and faithful goddaughter and caregiver for the past 16 years; special niece Beatrice Green Prescott of Memphis, Tenn.; nephew Marshall Johnson (Beatrice) of Detroit, Mich.; godchildren, the Rev. & Mrs. Earl E. Nance, Jr. (Viola), the Rev. Shannon M. Reed (Tonia); Erika D. Neal of Atlanta, Ga.; her beloved coworker Karen Lewis (Herman); an “adopted” son Anthony Austin; the Greater Mount Carmel Church Family, and a host of other extended family members and friends. In lieu of flowers, the Family asks contributions be made to The Griot Museum of Black History online at www.thegriotmuseum.com or mailed to 2505 St. Louis Ave., St. Louis, MO 63106.

Matrice Wilson Age 91 of St. Louis, Missouri. Fondly known as "Mama Matrice". Matrice J. Wilson was born May 1, 1930, in Bailey, Tennessee. She was one of nine children born to Harry Johnson and Lizzie (MacDonald) Johnson. Her parents, and... View Obituary & Service Information

The family of Matrice Wilson created this Life Tributes page to make it easy to share your memories.

Send flowers to the Wilson family.