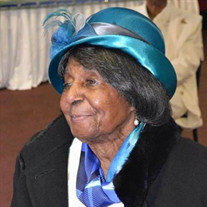 Naomi Washington Age 104 of St. Louis County, MO. (Webcasting will be on the Archway Memorial Chapel Facebook page beginning approximately between 10:15-10:30am.) " You have granted me life and favor, And Your care has preserved my spirit.”- Job 10:12  Naomi W. Washington, a devout christian, passed away peacefully in her home May 5th at the age of 104. Naomi is the seventh of twelve children born February 22, 1916 to Mammie Stokes Washington & James W. Washington in Columbia, Mississippi in the Blue Springs community. She attended church and school in a christian community while working on the family farm in her adolescent years.   She professed a firm faith in Jesus Christ in her young adult life. Naomi was the mother of Bobbie J Armstong Brown. In 1943 she moved to St. Louis, MO with her aunt and family.  She worked as a housekeeper for many years at the Faith Hospital where she later retired. Naomi has been a faithful member of Washington Metropolitan A.M.E. Zion Church where she served as a member of the Cathedral Choir, deaconess, and a missionary where she traveled to the holy land with the late Bishop Richard Fisher and his wife Joan Fisher.  Naomi was also a member of the Corinthian Chapter #9 order of the Eastern Star where she served for more than sixty years.  As one of the elders in the family she helped start a family tradition with the Washington-Stokes bi-annual reunion that still holds strong today.  Naomi is survived by her daughter Bobbie Brown, brother Harry Washington, grandchildren Fennis Brown, Dennis Brown, Virginia Brown, Debra Brown, great grandchildren Lauren Cole, Dorian Brown, Dolan Brown, Crystol Brown, Brandon Jackson, Katrina Jackson, Donay Crawford, Cali Crawford, Carlos Crawford, Dejuan Crawford, and six great great grandchildren.  Naomi often said “There is a time and place for everything.” and this was her time to go and be with the Lord. She will be greatly missed.  “For God so loved the world, that he gave his only begotten Son, that whosoever believeth in him should not perish, but have everlasting life.” -John 3:16

Naomi Washington Age 104 of St. Louis County, MO. (Webcasting will be on the Archway Memorial Chapel Facebook page beginning approximately between 10:15-10:30am.) " You have granted me life and favor, And Your care has preserved my spirit.&#8221;-... View Obituary & Service Information

The family of Naomi Washington created this Life Tributes page to make it easy to share your memories.

Send flowers to the Washington family.