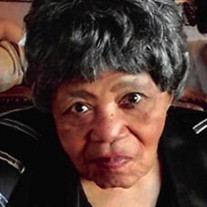 Odella Booker, Age 93 of St. Louis, Missouri. Odella Briggs had a wonderful life, born on June 18,1925 in Lamont, Mississippi, the 9th of 13 children born to Samuel and Estella Briggs. Her father graduated from Alabama Agricultural and Mechanical University. Her mother owned the land on which they lived. (Never to be lonely because there were 12 siblings.) Odella was united in holy matrimony to Riley Booker on June 21,1945. To this union, 4 children were born. In 1953 the family moved to St. Louis. Understanding the need for Christian guidance, they joined Centennial Christian Church. Odella was a faithful member who was involved in several organizations and the Senior Choir until her health began to fail. Riley worked at the Post Office until his retirement. However, Riley and Odella owned and operated Economy Maintenance, which serviced several car dealerships in the St. Louis area. In addition, for many years they owned a store, Kingshighway Sundries, located on Kingshighway and Lotus Avenues. Riley preceded Odella in death on September 27, 1987. Odella’s “Greatest Love” was her family, her children Patricia Slate, Larry Booker (deceased), JoAnne Booker, Pamela (Terrance) Muhammed, and often the phonecalls that she received from her step-son in California, Otis Ray Elzy (deceased) and his children; her grandchildren Roderick Goode, Angela (Raymond) Ricketts, Felecia Booker, Bobbette Butler, Laura Booker, Nilah Muhammed and Samiyah Muhammed; great grandchildren Theresa Rollins, Larry Booker, Jamila Ricketts, Rashaad Ricketts, Loriel Beavers; great-great granddaughter Daliyah Meekins; and a host of other family members and friends.

The family of Odella Booker created this Life Tributes page to make it easy to share your memories.

Send flowers to the Booker family.