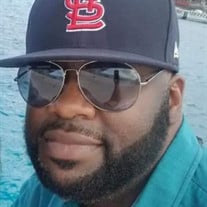 Ronald O. Bell, Jr., Age 48 of St. Louis, MO. Ronald Oliver Bell Jr was born to loving parents, Ronald Oliver Bell, Sr and Etta Dora Bell on March 16, 1972. He was the second of three children produced from that union. He spent his formative years in Maplewood, Missouri where he graduated from Maplewood-Richmond Heights High School. Ron went on to attend Fontbonne University to study business. As he settled into his new journey he welcomed his handsome son Ryan, and soon after welcomed his beautiful baby girl, Britney. Ryan was a prince to him and Britney was the "apple of his eye". Ron was able to raise his children with the love and support of their mother, parents, immediate and extended family. Ron was not only a father and true family man, he also worked as a Bonding Mechanic at GKN Aerospace. He was a hardworking employee who built many friendships that remained outside of work. He then met his wife LaKeesha in June 2012 during a late night run to Walmart and from the first date they were inseparable. They were married October 2013. LaKeesha began her business, The Bling Takeover, LLC in May of 2017. Ron retired from his corporate career with LaKeesha in June 2018 to work their business full-time. His kind-hearted nature and loving spirit is something that resonated with their business partners across the U.S. Ronald loved spending time with family, especially his father Ronald Sr; he spent quality time with him every Thursday and kept in touch often with his brother Juan. Ron was raised in faith and was a true man of God. He dedicated his life to ministry and God at an early age, almost side by side with his mother, Pastor Etta Bell. In his tenure at First Church of God- Richmond Heights, he held many positions such as Minister, Sunday School Teacher, Choir Director, Organist and was a member of the Board of Trustees. In 2014, Ronald joined LaKeesha's home church, Victory Christian Outreach Church. At Victory he was on the Praise & Worship Team, a Sunday School Teacher, Youth Pastor and apart of the Men of Valor. Ron lived a full life and was loved by many. He placed his faith and trust in the Father to whom he has now returned. He leaves to mourn his passing: loving wife, LaKeesha Bell; children: Ryan Bell and Britney Bell; siblings: Lee Bell and Juan Bell; nieces: Jazmen Bell and Destiny Bell; God children: Kerrington Bruce, Ayden Dunn and Brennyn Dunn. He also leaves an incredible Church family and a host of other family and friends, who will forever miss his smile, spirit, and laughs. He was proceeded in death by his mother, Etta Dora Bell.

The family of Ronald O. Bell Jr. created this Life Tributes page to make it easy to share your memories.

Send flowers to the Bell family.