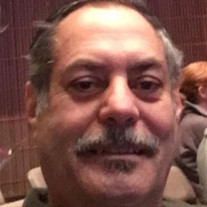 Samuel L Marinelli (Sam) of Hazlewood, MO. and El Segundo, CA. Age, 59 Born in St. Louis, Missouri February 29th, 1960 at city hospital. He grew up in Hazlewood and attended Hazlewood West High. After graduating, he joined the U.S Marine Corps and proudly served his country from 1978-1981. He obtained the MOS code 0844 a Field Artilleryman. His tours of duty were Twenty Nine Palms, CA. and Okinawa, Japan. This is were he developed his passion as a 2nd amendment supporter, firearms collector and a fancy for Chow Mein. Sam completed his tour in California and met Illana (Fleener) Flint, whom he had his Son with, Samuel L. Marinelli JR December 16th, 1982. They moved back to St. Louis for a short time but quickly found themselves heading back through that Arch (the gateway to the West) returning back to the bustling city of Los Angeles. After a few years of work in factory’s, Sam landed a job as a refinery operator at Chevron Oil Company, where he quickly found himself at “home” working shift work and learning all the stations. Throughout his 32-years career at Chevron he participated in the refinery’s volunteer emergency response-firefighting squad, played on the Blending and Shipping softball team, served as Chief Union Steward, and being promoted to Head Operator in B&S, making the wharf (HO3) his home, as all his coworkers knew that this was his favorite station to work at. He was also known to be a practical joker, playing pranks and being on the receiving end of them was always a topic of discussion and aroused a good laugh. Sam was preceded by his Father Gilbert Marinelli who passed December 6th, 2016 and his Girlfriend Jan M. Conklin, who passed a month earlier than he; March 26th 2019. He is survived by his mother Lucy Marinelli, brothers David Marinelli, Kenneth Stotler JR., sisters Suzanne (Marinelli) Dupree, MaryAnn (Stotler) Crabtree, his Son Sam JR, his grandchildren Samuel Marinelli III and Sawyer Marinelli. Sam was a loving and hard-working father, son, brother and friend. He loved the outdoors, gardening, hunting, camping and many little projects he had. He was very kind to his family and friends allways willing to lend a helping hand, share an adventure in the outdoors or a laugh or two, and some good food over the BBQ. He stood up for what was right and would sometimes support the underdog or the long shot if he was at the horse track. He was a teacher, not in the traditional sense but those who knew him can attest to the fact that he loved to share his knowledge especially about the outdoors; one of his favorite pastimes was to watch Jeopardy, this was his thing. He was a mentor and a friend always was there for advise and to lean on. There is a saying by Albert Pike that comes to mind here: “What we have done for ourselves alone dies with us; what we have done for others and the world remains and is immortal.”. What Sam has done for others and the impact he has had to those who knew him will definitely live on forever. His diagnosis of lung cancer in October shocked everyone and has taken away the breath of those that were closest to him. He was set to retire to his farm in Bucryus, MO. this September. He didn’t loose hope, like a Marine he dug his trench and prepared for battle. He fought like hell and never gave up! In the end, he was victorious because he has life in heaven through Jesus Christ.

The family of Samuel Lee Marinelli created this Life Tributes page to make it easy to share your memories.

Send flowers to the Marinelli family.