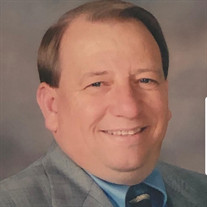 On Tuesday, June 4, 2019, Terry Gunn, age 68, hit the final note on the keyboard of life, as he crossed peacefully from the earthly to the eternal at his home in O’Fallon, Missouri, surrounded by a host of family and friends. Terry entered the world on August 20, 1950, in Bloomfield, Missouri, as the firstborn of Marion and Ruth Gunn. When Terry was a young boy, the family relocated to the Saint Louis area, where he was raised with his six younger siblings. At the age of four, following a polio diagnosis, Terry began showing interest in the piano. Turning adversity into victory, Terry started down a path that lead to him becoming a prolific songwriter and recording artist, who touched the lives of countless individuals worldwide. Terry met Julia Chatman at youth camp when he was twelve-years-old. It was love at first sight for Terry, and he announced to his pastor that he was going to marry her. But from Julia’s point of view, the feelings were far from mutual. While attending Gateway College of Evangelism in the late 1960s, Terry began to receive invitations to accompany various gospel groups in the Saint Louis area, beginning a journey of more than thirty-nine years in full-time music ministry. But the highlight of his time at Gateway was when Julia finally fell in love with him. After Terry and Julia married in March 1970, they traveled with Lanny and Marietta Wolfe for the next two years. The Gunns then relocated to Phoenix, Arizona, serving as full-time music ministers for the next four years. During this time, the Gunn family of two became three when Terry and Julia welcomed their firstborn, Christy. In 1977, Terry became the music director at Christian Life Center in Stockton, California. During their thirteen years in California, their family grew from three to five, with the births of Heather and Ryan. In 1990, the Terry Gunn family left Stockton and for the next seventeen years ministered throughout the United States and Canada. Most of their songs were original compositions written by Terry himself. In the 1970s, the Gunns recorded three projects with Herald Records. In the 1980s they recorded four custom projects in California; and in the 1990s they recorded several albums with Zion Music Group in Nashville, Tennessee. These included five family albums, two with Gateway College Choir & Chorale, and other piano projects. The Steeles, The Lesters, The Arnolds, The Singing Ambassadors, The Inspirations, and Greater Vision have all recorded some of Terry’s songs. He also wrote and recorded a series of Praise and Worship Chorus books. In 2007, he released a family Christmas instrumental. Since then, Terry also recorded a series of piano instrumentals. Terry loved his family, his music, and his 1948 five-window Chevy pickup. Known for his quick wit, jokes, and silly songs, Terry hung a sign in his motor home that read, “Laugh at yourself; everyone else does.” That was Terry ¬– always full of joy and laughter, finding humor in almost every situation. But above all else, Terry loved God and dedicated his entire life in service to the Kingdom. The legacy he leaves behind is one to be admired and exampled. Terry was preceded in death by his sweet mother, Ruth Gunn. He is survived by his wife, Julia; his three children, Christy (Jonathan) Lucas, Heather (Grant) Edwards, Ryan (Michelle) Gunn; and five grandchildren who lovingly called him PawPaw, McKenzie Lucas, Aidan Edwards, JoLeigh Lucas, River Gunn, and Kolten Gunn. Terry is also survived by his father, Marion Gunn; his four brothers, Jim (Linda) Gunn, Tom (Carol) Gunn, Dennis (Michell) Gunn, and Curt (Jennifer) Gunn; and two sisters, Marsha (Robin) Johnston, and Melanie Claborn. Oh, the shared memories these siblings have of wonderful times spent with the best big brother a person could want. Terry was also adored and will be greatly missed by his many nieces and nephews, as well as a multitude of family and friends. Visitation will be at The Sanctuary, 965 Anglum Road, Hazelwood, Missouri, on Friday, June 7, 2019, from 4:00 PM to 8:00 PM and Saturday, June 8, 2019, from 10:00 AM to 11:00 AM. The funeral service will be held at The Sanctuary on Saturday, June 8, 2019, at 11:00 AM. Interment will be at Memorial Park Cemetery in Jennings, Missouri, immediately following the service. In lieu of flowers, donations may be made to help the family with funeral expenses. The family extends a special thanks to Archway Memorial Chapel for their care and support during this time.

On Tuesday, June 4, 2019, Terry Gunn, age 68, hit the final note on the keyboard of life, as he crossed peacefully from the earthly to the eternal at his home in O&#8217;Fallon, Missouri, surrounded by a host of family and friends. Terry entered... View Obituary & Service Information

The family of Terry Gene Gunn created this Life Tributes page to make it easy to share your memories.

Send flowers to the Gunn family.