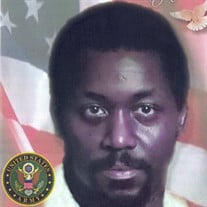 Theophilus Finch, 73 of St. Louis. Served his country in The United States Army. Celebrating the life of Mr. Theophilus Finch aka “Hus” / “Ted” born January 17, 1947 in St. Louis, MO to the union of Ellis and Elizabeth Finch. Hus was the second oldest of eight siblings. He was preceded in death by his parents, Ellis and Elizabeth, and brother Ellis (Renald). Hus confessed his faith in Christ at an early age. He was drafted in 1968 and served faithfully for two years during the Vietnam War. During his time in Vietnam, he was awarded with three medals for his service (National Defense Service Medal, Vietnam Campaign Medal, and Vietnam Service Medal). After returning home, he married the love of his life, Christine Dillard in St. Louis, MO on June 12, 1971. To this union two children were born, La’Tricia and Anthony. Hus was employed by Moog Automotive for many years before the plant relocated. He went on to work for BioMerieux before retiring in 2013. Hus was known to be a man that loved his family. He loved to cook and clean. Some would say that he had OCD. He also loved to barbeque, dance, and decorate. He loved spoiling and spending time with his grandchildren. He will be truly missed by those who loved him dearly. On December 15, 2020 at approximately 3:45am, Hus was called home to rest while being comforted by his son. He leaves in celebration of his life and legacy a wife of 49 years (Christine Finch); one daughter La’Tricia (Keith) Word of Olive Branch, MS; one son Anthony Finch of St. Louis, MO; two granddaughters Monica and Charlise Ingram; two grandsons James and Jonathan Ingram; four great-grandchildren Gabriel, Ava, Mason, and Adrian; one brother Lewis of TX, three brothers Harold, Lawrence, and Brian; two sisters Stella and Jeanette all of St. Louis, MO; a host of nieces, nephews, family and friends that loved him dearly.

The family of Theophilus Finch created this Life Tributes page to make it easy to share your memories.

Theophilus Finch, 73 of St. Louis. Served his country in The...

Send flowers to the Finch family.