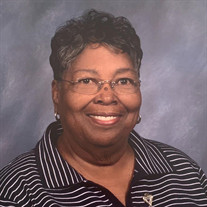 Verna M. Wells, Age 83 of St. Louis, MO. Wife of the late Ernest Wells, Beloved mother of Joyce Finch, Cynthia Wells and Christie Wells; Dear Grandmother to Jaron Wells and Ashlen Finch; Dear mother-in-law to Harold (the late Joyce N.) Finch. Verna Mae Wells Obituary. Verna Mae Wells was born in St Louis, Missouri on July 28, 1937 at Homer G. Phillips Hospital and is the fifth child of Theodore Whitener and Pearl (Gilwater) Whitener. She then had two brothers and two sisters, Howard, Dorothy, Marie and Charles. The Whitener Family was blessed later with three additional daughters, Patsy, Peggy and Charlene. Theodore, Pearl, Howard, Dorothy and Charles have preceded Verna in death. She was baptized Catholic as an infant at Holy Angels Catholic Church in Kinloch, Missouri. She carried her faith and love for Christ Jesus throughout life. Most of her youth was spent in Kinloch, Missouri where she attended Holy Angels Elementary School. Verna writes in her mini autobiography, “The first twelve years of my life were some of the happiest times. Actually, what some would call ‘those happy years,’ we called ‘the good old days.’ We were allowed to be children. We played with lifelong friends. The friends were Mary Frances (Mayes) Clark, Delores (Cothran) Clay, Gerry (Sample) Cook, Carlleen (Farrell) Parker and Claudette (Farrell), Neil, Lester Bryant, Delores, John, Billie and Ernest Simmons, Bobbie Miller and Wendell Allen.” After graduating from the eighth grade, Verna attended and graduated from Laboure’ High School in 1954. She later met, married and divorced Joseph Kapeamu and from this union Joyce Nanette Kapeamu was born on May 26, 1956. She continued to raise Joyce with support from her loving family. She worked for eight years in alterations at the Ferguson Department Store in Ferguson, Missouri where she became a skilled professional seamstress. In 1964 she married Ernest Leroy Wells and from this union two daughters were born, Cynthia Annette Wells in 1965 and Christie Lynnette Wells in 1966. In 1980 she began to work seasonally as a tax preparer for H&R Block for twenty-four years during when she met many lifelong friends. Other friends who were dear and close to her were Alan Clay husband of Delores (Cothran) Clay, Joe and Lorraine Wells, Walter Petty, Flora and Paul Thornton and a host of many more. Family and friends were extremely important to Verna. She was always there to lend a helping hand and to offer encouragement. She loved her husband Ernest and their three daughters who she called, “her girls.’’ She was very proud of her son-in law Harold Finch. She also loved and cherished her three grandchildren who she called, “her precious jewels”: Ashlen Kapeamu Finch, father of her great grandchild Nakhi Finch; Jaron Anthony Wells who is married to Amanda (Kertsten) Wells; and granddaughter, Cali Shawn Wells. The following is captured from Verna’s mini autobiography: “On February 17, 2008, I lost the best friend and husband anyone could ever have. He turned 75 years old that horrible storming early morning...” She later writes, “On December 2, 2015, I lost my beautiful daughter, Joyce…” She concludes with, “Now this is the end of my life’s story. Love you family.” – Verna Mae Wells passed on August 20, 2020. Thank you to all friends and family consisting of sisters, brothers, brothers-in-law, sisters-in-law, nephews, nieces and cousins for a lifelong of precious memories. Services will be limited and private.

The family of Verna M. Wells created this Life Tributes page to make it easy to share your memories.

Send flowers to the Wells family.