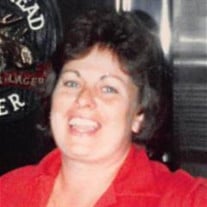 Veronica Karius, Age 75 of Florissant MO. …with freshly tweezed eyebrows and a perm in her hair, Ronnie cashed in her chips and bid us farewell. Ronnie was born in the summer of 1945, to Miss Hallie “Toots” McKie and Albert Jesse Mills. She spent the greater part of her childhood in South St. Louis City surrounded by seven siblings. Toots would fill their bellies with biscuits and gravy and drop the girls off at Lafayette Park where they swam and fished until the sun went down. Always on the go, when Ronnie wasn’t stealing George’s cigarettes or shaving Aunt Mart’s legs, she was on the field with the boys playing cork ball at Hodgen Elementary. A tom boy at heart? Nope! That tall, dark and handsome outfielder is what kept her on that bench! It was on that field that Ronnie met her best friend and love of her life, Richard Bernard Karius. Eager to steal his heart, she tossed aside her ball mitt and reached for her curlers. Every night, Ronnie would doll herself up and sit on the porch, waiting for Rick to stroll down Eads Avenue. She would hand him a coca-cola after his long day of selling produce at Soulard Market and they would sit on the porch together, talking well into the evening hours…until Toots would come home from the Stop and Shop and finally tell Rick to kick rocks. In the spring of 1963, Richard proposed, Toots gave her permission and Ronnie said “I Do!” The newlyweds would hop from attic to attic until they found a home in St. Ann and quickly became a family of five. Ronnie’s passage into motherhood began with her beloved yet wild son Ricky, then came the audacious Kimberly Ann and lastly the feisty baby she carried on her hip for two years straight, Angela Marie. This trio of chaos was her whole world. She was not only their mother but their friend, someone they could turn to for love and laughter. Ronnie lived a lifetime of adventure! She navigated family road trips to the Grand Canyon and Mount Rushmore. On ski trips at Bull Shoals, she’d man the boat with one hand and fish with the other. She could rip the lips off a trout with sewing thread and a ball of cheese. She took first place in Bass tournaments far and wide. When she wasn’t fishing, she was gambling! “If you don’t bet big, you won’t win big” was her motto. Her bingo bag full of good luck charms and colorful dobbers, we’d wish her luck as she raced out the door to win big. When bingo fell short, Ameristar’s glitz and glam took her in and made her an Elite member of the Star Club (which landed us at the grand buffet on most Sunday mornings). Her latest guilty pleasure was scratch offs! Lady Luck was in her favor most times. Ronnie also filled craft tables with handmade wreaths and Raggedy Ann dolls. She would sew a patch over a hole in your favorite jeans or hem your hand me down dress. She grew gardens overflowing with tomatoes and cucumbers and wouldn’t let you leave the house without a bundle of your own. Ronnie’s kitchen was full of foot traffic, there was always room at the table for anyone looking for a bowl of her famous potato salad. A master of the culinary arts, she would tickle your taste buds with whatever she had in the cupboard. She’d turn biscuits into donuts and powdered milk into cream. You could give Ronnie lemons and she’d make you a pie. Though she preferred chocolate! Throw a little candy Ronnie’s way and she’d light up like a Christmas tree. A Cardinals enthusiast, she never missed a game…until Trump was sworn in, then politics took over the television! That comb over didn’t trump Days of Our Lives though, she never missed an episode. A homemaker at heart but also a jack of all trades. Ronnie pulled up her bootstraps and took on any challenge that presented itself and always came out on top. While raising three children and a few grandchildren too, she maintained three rental properties and the tenants she grew to love and hate. She could put the roof on a house or unclog a kitchen sink, no job was too big or too small. That being said, the local hardware store knew her all too well. Ronnie helped maintain a lawn service by day and slung cocktails while tending bar by night. She even polished diamonds as a jeweler and test drove new Ford vehicles across country. There was nothing Ronnie couldn’t do. She did whatever it took to take care of her family. When someone stepped out of line, she was there to reel them back in. When someone fell apart, she was there to pick up all the broken pieces. She was our rock, our comic relief, our steel magnolia. How lucky we are to have been loved by her. She will be deeply missed by so many. Her spirit lives on by a crazy family of which she was very proud of…her loving husband, Richard and her daughters, Kim (Bill) and Angie (Terry); her grandchildren Josh, Ashley, Melissa, Justin, Amber, Alex, Hannah, Nia and Alyssa; her great grandchildren, Remi, Nora, Leo, Reyna, Grimm, Oliver and Lucy; and her siblings and their families, Joanne, Cuppy, Shookie, Sandy, Donna and Mike. She was met at the pearly gates by her mother, Toots, her favorite son, Ricky and her partner in crime, Chris. She is surrounded by those she missed most. Known fondly as Ronnie, Ron, Weezer, Mom, Grandma, Big Grandma, GG, (some not PG enough to mention)….Please join us in celebrating her life and the imprint she left on all of our hearts this spring. More details soon to come!

Veronica Karius, Age 75 of Florissant MO. &#8230;with freshly tweezed eyebrows and a perm in her hair, Ronnie cashed in her chips and bid us farewell. Ronnie was born in the summer of 1945, to Miss Hallie &#8220;Toots&#8221; McKie and Albert... View Obituary & Service Information

The family of Veronica Karius created this Life Tributes page to make it easy to share your memories.

Send flowers to the Karius family.