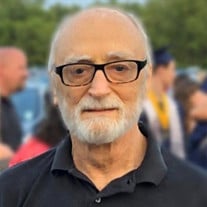 William “Bill” Y. Reed, Age 74 of Dardenne Prairie, MO Beloved husband, father, grandfather, brother, uncle, cousin, friend…known for his dry wit. Bill Reed, of Dardenne Prairie, MO, died on November 2, 2019 at the age of 74. He was born in Wichita, KS to Dale & Cathryn “Kitty, Kate” (Davis) Reed. Bill was the second of three children. He graduated from Wichita Southeast High School in 1963. He served in the US Navy from 1963 - 1967, then he attended Butler County Junior College. In 1970, Bill’s only son, Todd, was born. In 1985, Bill married the love of his life, Nancy (McCoy) Reed, and they had 34 wonderful years of marriage together. Bill worked at Koch Industries for 20 years, then he and Nancy started Enterprise Travel in Wichita. They traveled extensively, and lived in Kansas, Oklahoma, Washington, and Missouri together. Bill’s two grandsons were a source of great pride. He loved playing and joking with them. He is survived by his wife, Nancy, a sister, Barbara (Ted) Gamlem, a brother, Mike (Vicki) Reed, one son, Todd (Lisa) Reed, two grandsons, Aaron Reed & Connor Reed, many nieces, nephews, cousins, and in-laws. Bill was preceded in death by his parents, Dale & Kate Reed and his niece, Michele Reed. A visitation will be held in Lake St. Louis on Saturday, November 9, 2019, between 1:00pm and 4:00pm. Contact the family for details. Services will be held in El Dorado, KS at a later date. Memorial contributions may be made to Seasons Hospice Foundation, 6400 Shafer Court, Suite 700, Rosemont, IL 60018. www.SeasonsFoundation.org

The family of William "Bill" Yard Reed created this Life Tributes page to make it easy to share your memories.

Send flowers to the Reed family.